At Los Angeles Sinus Institute, patient education forms a significant part of our practice. We treat the whole person – not just the disorder. Our medical therapies and surgical techniques are designed to treat the source of the disease, rather than merely address the symptoms. The better our patients understand their own anatomy, the better the communication between patient, doctor, and staff, and the more successfully we can work together in an individualized plan of treatment. 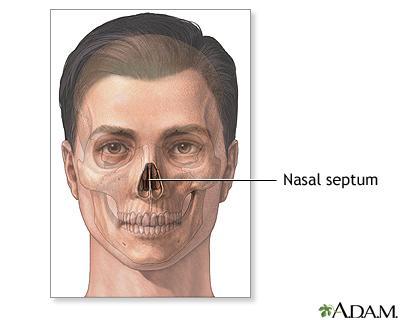 The interior of the nose and nasal cavity are parts of the body not often seen, except during medical examinations, and not everyone is aware of what parts comprise their nasal anatomy. Those parts include:

The nasal septum is the vertical wall in the middle of the nose that separates the right and left nasal cavities. This wall extends back to the end of the nasal cavity and is made up of cartilage in the front and thin bone in the back. The main functions of the nasal septum are structural support for the nose and regulation of air flow in the nasal passages. The septum is also lined with mucosa.

A turbinate is a long, narrow, curled bone that protrudes into the nasal cavity. Each turbinate is covered with mucosa. The side walls of the nose each have three turbinates called the superior, middle and inferior turbinates. The turbinates enlarge or shrink alternately on each side of the nose at regular intervals.

The space between each turbinate is called a meatus, and each meatus is named for the turbinate above it. The inferior turbinate is the largest turbinate, which runs parallel to the floor of the nose. The nasolacrimal duct (tear duct) drains tears into the inferior meatus, which explains why people develop a runny nose when they cry. 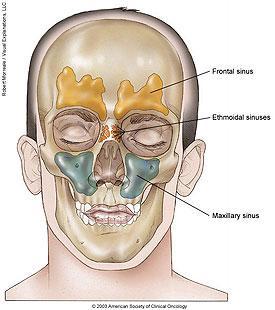 Sinuses also have their own anatomy and function. Many of us are not aware of our sinuses most of the time – except when infection and other sinus disorders cause pain, pressure, sleep disorders, or impaired hearing, or breathing.

Nasal sinuses are hollow, air-filled spaces, within the bones of the skull and face. We possess four pairs of sinuses. Each sinus connects to the nasal cavity through small openings called ostium. Each sinus is named for the bone within which it is located:

There is one maxillary sinus on each side of the nose, located under the eyes, in the cheeks.

Approximately 6 to 12 small ethmoid sinuses are located on each side of the nose, between the eyes.

There is one frontal sinus on each side of the nose, located above the eyes, in the forehead.

One sphenoid sinus on each side of the nose is located behind the ethmoid sinuses near the middle of the skull, behind the eyes.

Nasal sinuses are covered with a special lining, similar to the lining in the nasal cavity, called mucosa. This lining secretes mucus, a complex substance that keeps the nose and sinuses moist. Mucus also helps trap dust, viruses, and bacteria and removes them from the nose.

The sinus mucosa is ciliated; that is, each cell on its surface has a cilium, a hair-like structure that has the capacity to push sinus mucus. This movement of mucus, which is known as mucociliary clearance, is responsible for clearing the sinuses and nasal cavity of substances trapped in the mucus.